Scrapping for a Cure for Cystic Fibrosis

Last year I was asked to participate in an auction that benefits Cystic Fibrosis.  The organization I worked with is called Scrapping for a Cure.  It was started and is still run by Rachael McGuire and her family.  Rachel is the mother of Kaitlyn; a pretty fabulous 9 yr-old diagnosed with cystic fibrosis at 18 months old.  Rachel and her sisters have been hosting a scrapbook retreat ever year since 2010.  I made a quilt last year for the auction and helped to raise almost $2000  over $8,600 (Edit: the $2,000 was from a different and singe event - garage sale- they hosted this year that will go towards the 2016 donation); the most they have risen since they began doing the auction.
I learned about this cause and event through my friend Tara, Kaitlyn’s aunt.  Tara is probably the most creative person I know (and I know a ton of creative people).  She is that person you aspire to be and hate at the same time.  We met scrapbooking about 5years ago and have been friends ever since.
The scrapbook retreat happens in March, here in Memphis.  Its always filled with fun, prizes, classes, and friends (new and old).  There is usually a pop-up shop or two for those who run out of supplies too.  I have been and have volunteered.  It’s a blast.  I am hoping that this year I will be able to join in the fun again.

The quilt – The colors for CF are purple and blue, so I stuck with that when planning.

I quilted in a stipple pattern using aurifil 50wt thread in Dark Purple.  The background is Kona cotton Purple and the binding is Konna cotton Mulberry.

The quilt finished at 72x72

I had more people want to buy this quilt from me than any other quilt I have ever made – so next year I am telling people about the auction before it starts instead of after.  lol

I am hoping that this year will be even bigger and better for them and I have been asked to make another quilt.  I have sent a request out to my quilt guild members for fabric donations and/or block donations for a scrappy star quilt.  The 2016 quilt will be even better than the 2015 I just know it.

Thanks so much for stopping by!

My second entry in the Blogger's Quilt Festival is my Color Explosion mini quilt for the ROYGBV category.
I made this mini for the Schnitzel and Boo mini quilt swap.  I picked through my scraps and tried to find my favorites for each color.  I used Elizabeth Hartman's octagonal orb block and it came out about 16inx16in. 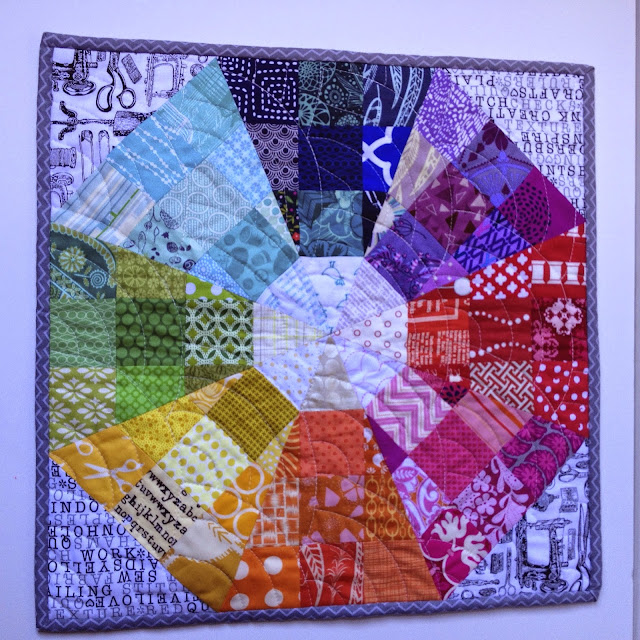 I call it Color explosion because it starts out small with the low volume colors in the center and just gets brighter.  Real original.  lol 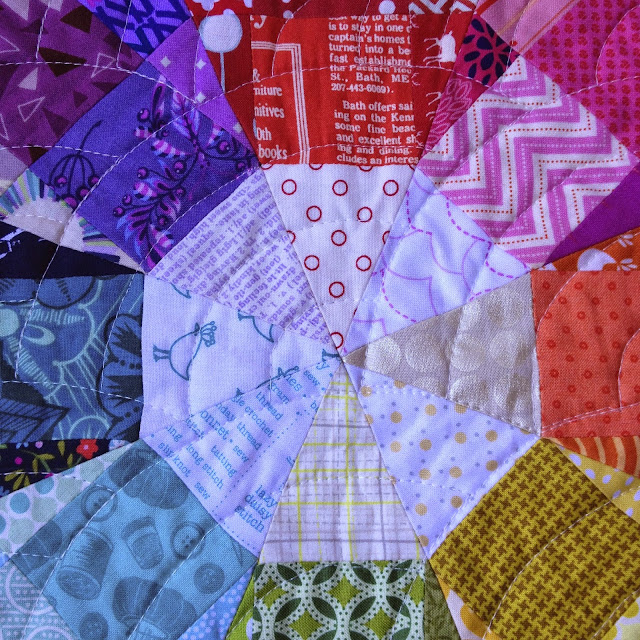 I quilted with a baptist fan design - using my walking foot...so cheating.  The thread was Aurifil 2024. 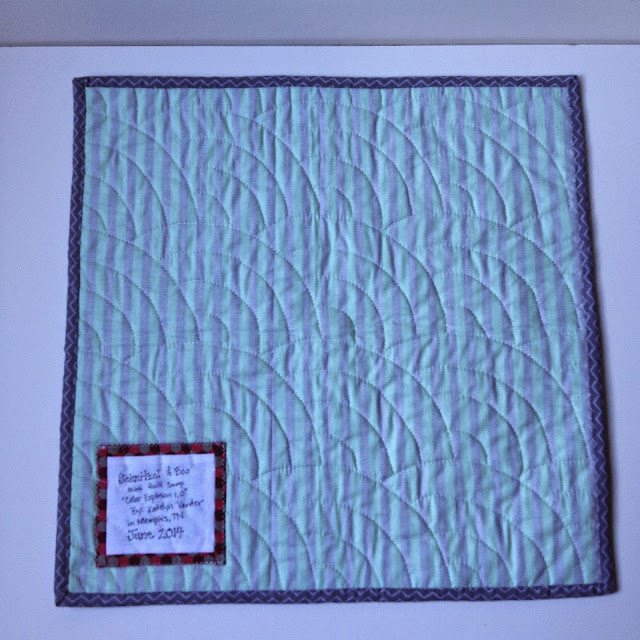 You can see my two original posts here and here. This is the first rainbow anything I have made, and I am in love with it.  I think I should make one for myself.

Thanks for stopping by!

My first entry to the Blogger's Quilt Festival is Triangle Baby. I am entering the 40x45 baby quilt in the Small Quilts category.
A while back I wanted to try out triangles.  My cousin was having a baby girl and I knew that would be the perfect small project to try them out for the first time.  I had a 60 degree triangle ruler and after picking out a few scraps of pink fabric I cut the largest sized triangles I could, 5.5 inches.  Then I used some Kona Berry for my background - man does it pop!
I love the randomness. 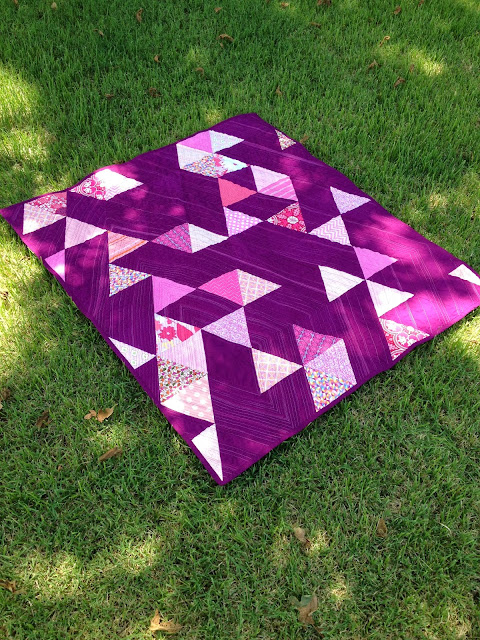 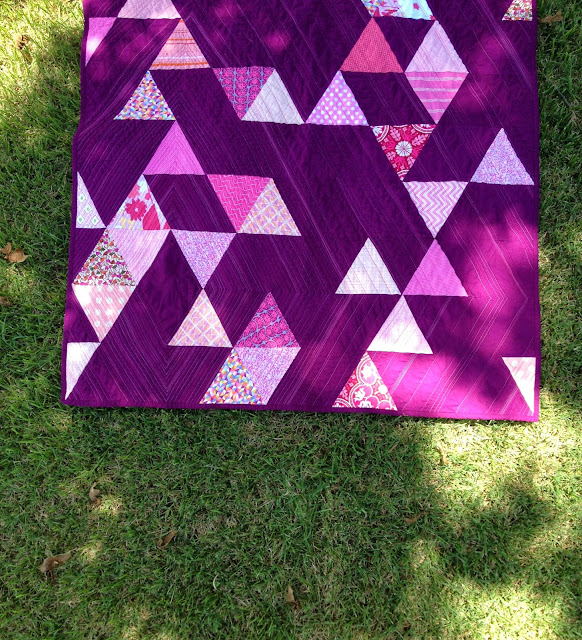 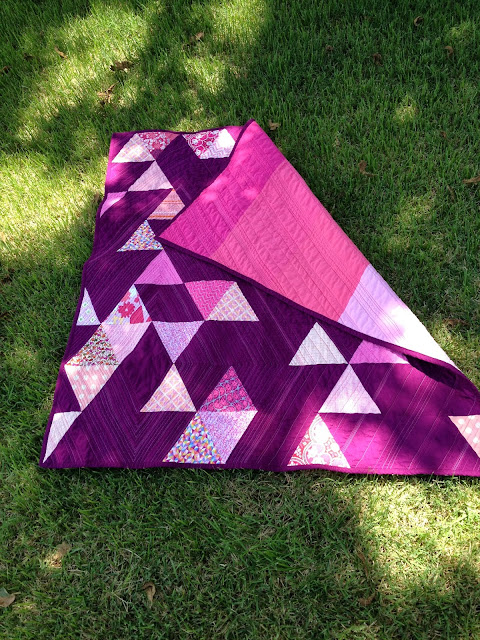 The back is made up of Kona - bright pink, azalea, camellia, carnation, medium pink, baby pink. 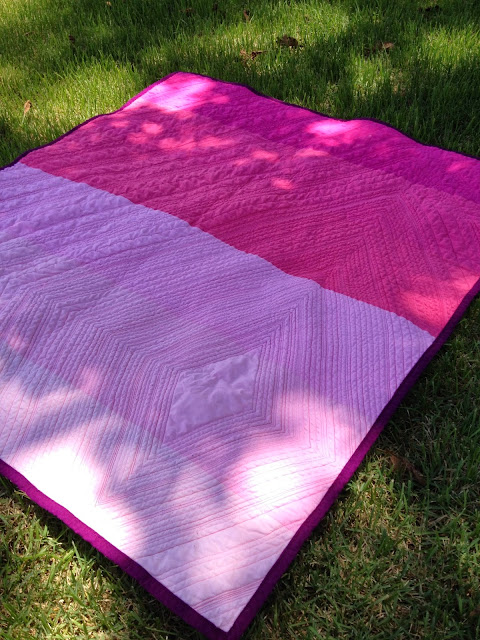 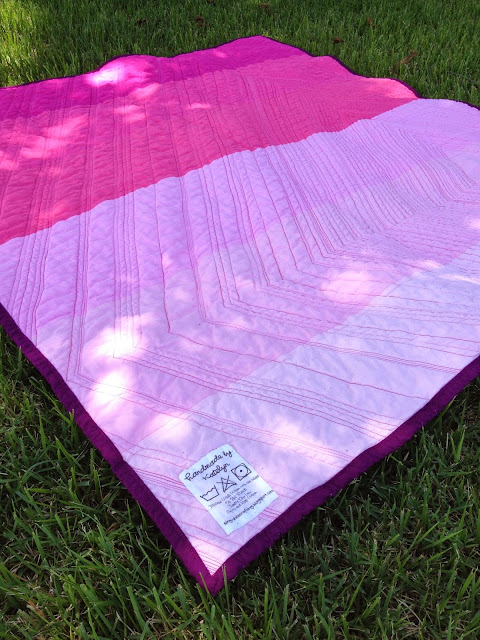 Thanks for visiting.  Please be sure to check out all of the other quilts in the Blogger's Quilt Festival.

Fat Quarter Shop has a quilt along benefiting St. Jude (man I would love to work there some day).  The second block is an adorable sewing machine and I knew I had to use it.  My most recent #birthdayclubhandmade gift was a great chance to do that.
March's birthday love's bright colors and low volume.  Her fav brights are lime and orange.  Those colors are not quite my forte so when i picked out the fabrics I was afraid that I wouldn't like how it turned out. 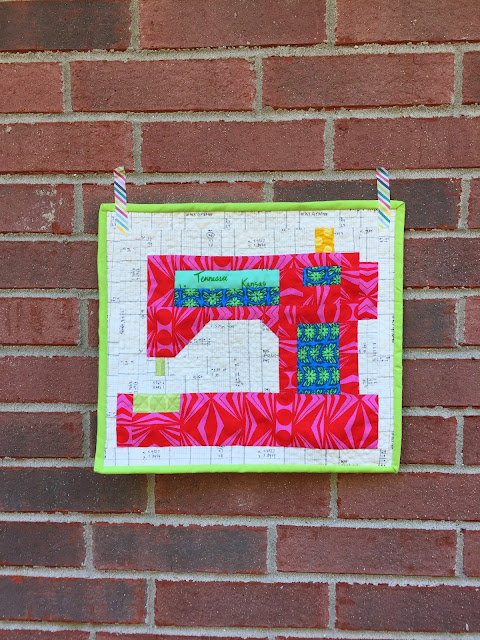 But it was cool.  Bright and I love it.


I used this time to try out "new-to-me" FMQ.  I had so much fun sewing on this and trying new things.

The back is this adorable quilter's newspaper...I think it is timeless treasures, but I can't say for sure.


I bound in a Sour Apple solid and I think it brings out more of the green in the mini. 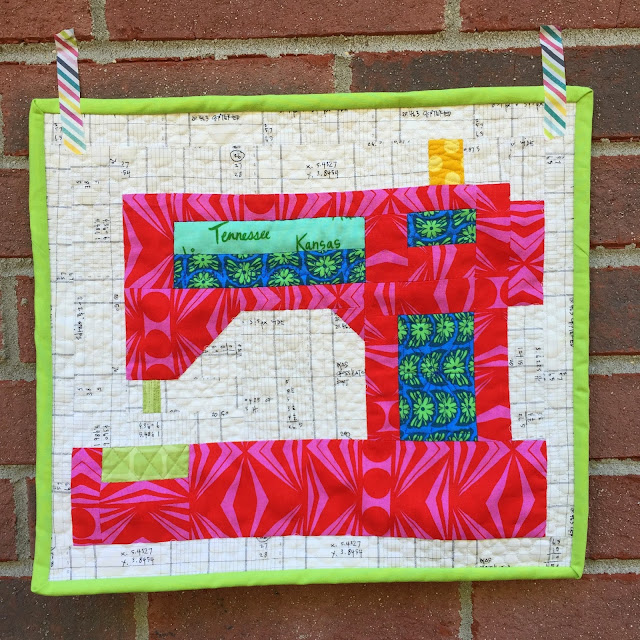 What are some quilting stiles you would have tried?  Or want to learn?